Birdwatching and discover one of Indonesia’s last frontiers: a remote and authentic tropical island of Northern Sumatra with beauty of birds and experience the magic of Simeulue bird. 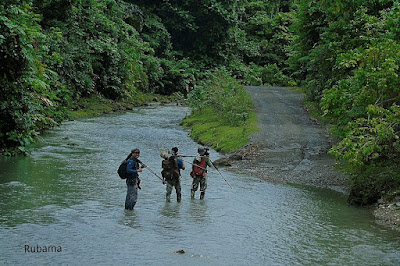 Simeulue is as one of the last frontiers of Indonesia and a paradise for surfers. Simeulue's landscape suffered a drastic change during the Boxing Day tsunami in 2004, raising West coast reefs 2 meters and destroying homes and infrastructure. Describes as forsted hills up to 576 m asl. The site includes two fresh-water lakes: Danau Laut Tawar and Danau Etutuk, both reported to be rich in fish and crocodiles.
Simeulue is as one of the best birdwatching site in South-East Asia. Secondary Endemic Bird Area selected based on Simeulue Scops-Owl (Otus umbra) and Silvery Wood-Pigeon (Columba argentina) present in this area (Stattersfield et.al. 1998). The important species in this area is Simeulue Scops-Owl and Simeulue Parrot the endemic species of Simeulue island.
Silvery Pigeon is a smallisland specialist, known from islands off Sumatra, Indonesia (e.g. Simeulue, Mentawi Islands, Riau and Lingga archipelagos), and off the west coast of Sarawak, Malaysia and Kalimantan, Indonesia (e.g. the Karimata and Natuna Islands, including Burong). There is one confirmed record each from mainland Sumatra and Kalimantan. Formerly locally common, it may have declined through the impacts of introduced mammals, logging and hunting. However, none of these records completely eliminates the possibility of confusion with the very similar Pied Imperial Pigeon.

The Simeulue parrot (Psittinus abbotti) is a species of parrot endemic to two small islands off Sumatra. It was once considered a subspecies of the blue-rumped parrot (Psittinus cyanurus). The Simeulue parrot is a small, short-tailed bird of stocky build, measuring approximately 19 cm. It has a bright green colouration, which in adult males is accented by a blue face with a green crown and a black collar. It differs from the blue-rumped parrot in its larger size, the lack of grey mantle and back, lack of blue rump, green instead of brown head colouration in the female, and blue head colouration in the male.

If you have any questions about our tours or require further information, we will be happy to hear from you. Give us a call at +6285361481022, or send us an email at aceh.birder@gmail.com or learn more about our Birding Tour Leader ( Click Here )

BIRDING TOURS by Aceh Birder , Founded in 2007. The Aceh Birder is the conservation organization working around Sumatra and Simeulue island off Sumatra and possible range to protect wild birds and habitat for nature and people. We envision viable, ecologically functioning populations of wild birds that are appreciated by humankind and conservation. Aceh Birder together with local people are manage "avi-tourism program" for conservation action to conserve the wild birds and habitat on which all life depends. ACEH BIRDER also are an independent tour organiser and ground agent for birdwatching trips to almost all birding areas in Sumatra. Aceh Birder can also organise trips for non-birders with a special interest in cultural, wildlife or nature exploration through community-based tourism and it's more than birding. We will bring you to enjoy the Holistic Birding in Sumatra. We are exciting, friendly, small-group birdwatching tours designed and guided by a team of leaders and experience with knowledge.